Skip to content
November 25, 2020
On January 10, Humberto Leon and Carol Lim, creative directors of the Kenzo brand, were invited to exhibit 2013 men's clothing at Mercato Central di San Lorenzo. This fully demonstrates that the Kenzo brand has become a rising star in the fashion industry. 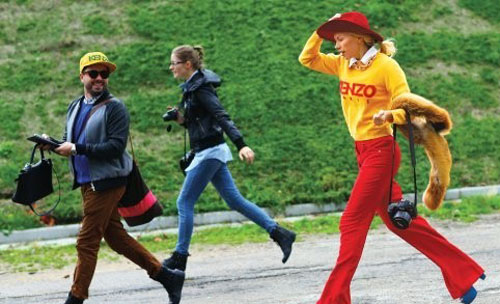 Whether it is at the just-concluded Pitti Uomo show or the 2013 spring series that was launched in July last year, Humberto Leon and Carol Lim showed us unique design talents, fun, romance and sentiment that became the latest synonym for the Kenzo brand.

As early as the 1970s and 1980s, the Kenzo brand gained fame in Paris, but in the late 90's, with the departure of the Japanese designer Kenzo Takada, the brand gradually went downhill. After Humberto Leon and Carol Lim received the brand 18 months later, it again took it. Brought back to the regular.

Kenzo Takada and Yves Saint Laurent, Azzedine Alaia and others belonged to the designers of the same era. His aesthetic concept of collision between East and West was greatly welcomed at that time and there were a group of followers. In 1993, the Kenzo brand was sold to the LVMH Group, but Kenzo Takada continued to serve as the creative director of the brand until 1999. His departure also caused the brand to sink.

In 2003, designer Antonio Marras took over the brand and followed Kenzo Takada's design style and philosophy. In the 40th anniversary of the brand in 2010, he put 40 exotic models on exotic models, stimulating retail sales of the brand, but He left the brand because the contract expired, which ushered in Humberto Leon and Carol Lim.

They were running a boutique named Opening Ceremony in the SOHO district of New York. They were well-known in the fashion industry. After an interview with LVMH Group Director Pierre-Yves Roussel, they successfully got the position of creative director.

Facts have proved that it was right to choose them. In 2011, Kenzo became one of the most watched fashion shows in Paris Fashion Week. The clothing of Kenzo brand became the favorite of street photographers, and it became popular in the world.